I've been enjoying this viral new word game eponymously named Wordle. The aim of the game is to guess the day's word in six or less tries. I'll go through an example game to give an idea of the rules. 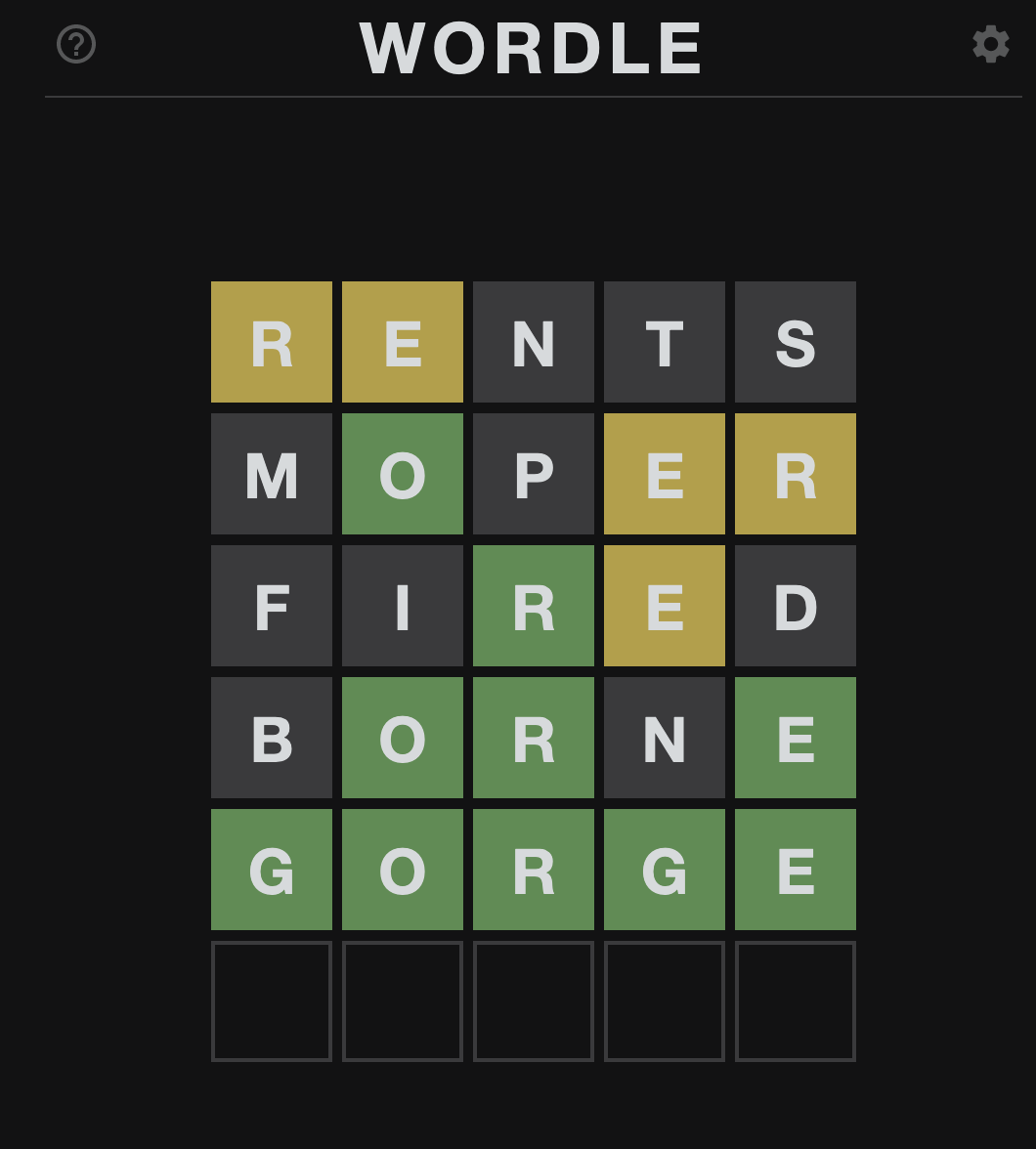 In this particular game:

Armed with these rules and an English dictionary, we can encode these rules as constraint satisfaction program and try to solve it using an SMT solver. My go to SMT solver is Z3 because it is simple to install, has well-made python bindings and an easy to use API.

With pip, cmake and a C++ compiler as prerequisites, you can simply install z3 with the following command:

My goal is to model this problem with variables and constraints that are easy to understand - hopefully helpful for people who are new to SMT solvers. Let's first start by instantiating the z3 solver class and constructing our variables:

We are going to model each letter of our guess as a separate z3.Int. z3 can represent arbitrarily large integers - but we only need to model each variable as a letter - ranging from 0 - 25 for the English alphabet. To model our variables in that legal range, let's add some constraints: Just to sanity check our work so far, let's run the solver and see what it gives us: A pretty boring result. The solver decided to set each of our letter variables to 0, resulting in the final word guess of aaaaa.

We'll need to teach the solver about English if we want it to pick words that actually make sense. We can use the dictionary that UNIX-like OS's come with:

Now that we have loaded the dictionary, cleaned up invalid characters and removed plurals (I've found that Wordle only uses singular words for answer words, if you found otherwise let me know!), we can add constraints to force the solver to pick only legal words. The add_legal_words_constraints function seems innocuous, but it adds a whole bunch of constraints and makes up the meat of the solver. Read in boolean logic, you can think of the solver now having the following constraints, given our dictionary only consisted of two words: "hello" and "world". Now we are ready to run the solver and get valid guesses only! Let's give it a try: Awesome! We get badge as our guess. We can input that into Wordle and see what we get. For the Wordle on January 10th, 2022, I get the following result: 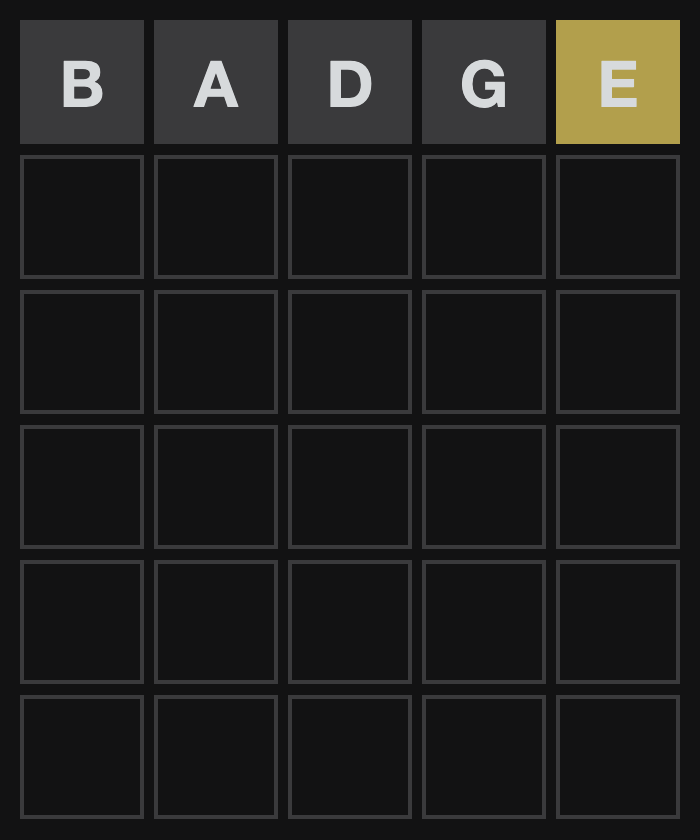 A relatively bad hit - we got 4 letters wrong and only one right, but in the wrong position. Let's add constraints to the solver to prevent it from picking these letters again and tell it that it should definitely consider E in it's future guesses. We prevent B A D G from appearing in any position and tell the solver that while E must appear in one of the positions, it can't appear in the fifth position. Let's run the solver again: Okay, great. It kept the E, but not at the fifth position and didn't guess either of B A D G. Let's input that guess and see what we get. 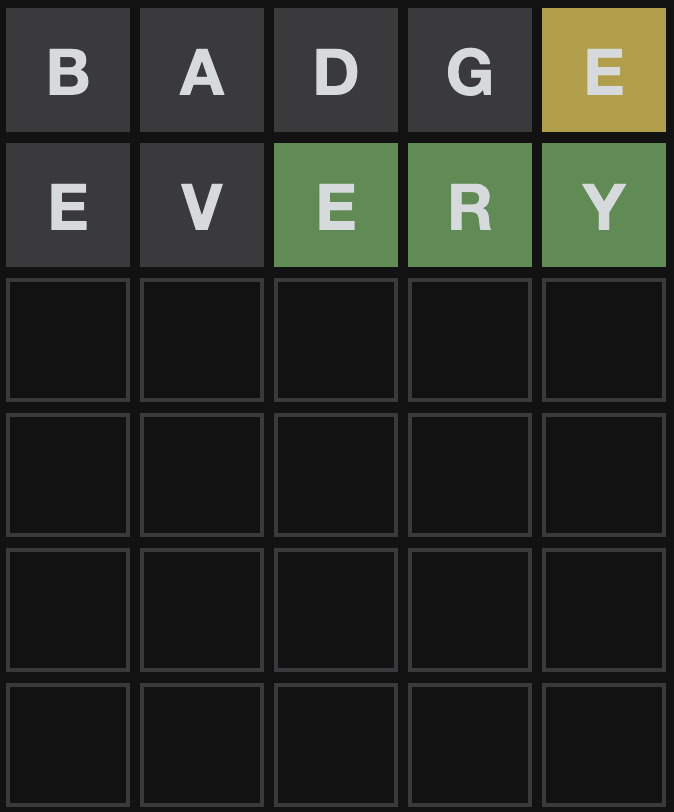 Wonderful, we got an exact match for E R Y. Note that the E in the first position is grayed out - this means that it should appear only once in this word. Let's add a constraint for that as well as adding more banning constraints.

With these new constraints, running the solver produces the guess: 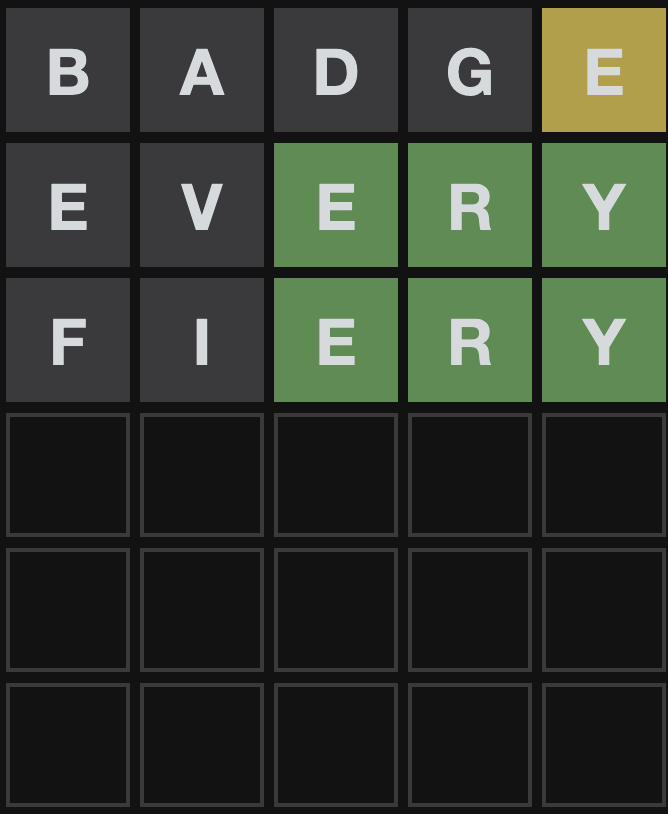 A complete miss :(. Let's prevent the solver from guessing both these letters: 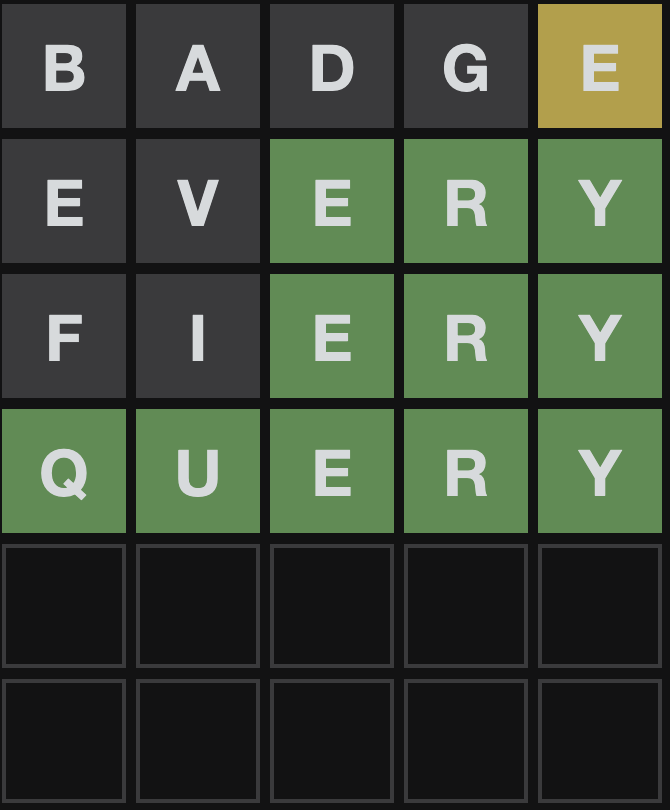 While the modeling we have so far works pretty well, we can further improve it by taking into account letter frequencies (how often a letter appears across words) and word frequencies (how often a word appears in a large corpus). In my testing I also found that the solver tended to guess words that I wouldn't really go for because they're words that, while legal, are obscure and never really used in common English. Wordle tends to use words that are not very obscure, but also not very common. We can use z3's optimization features to encode a cost function - valuing guesses that contain more frequent letters early on and more obscure words later as we have more information about the word's makeup.

Here's a snippet of such a model:

I highly recommend that you give modeling a problem with Z3 (or any SMT solver) a try - it's rewarding and allows you to express algorithms declaratively that otherwise become unmaintainable messes.